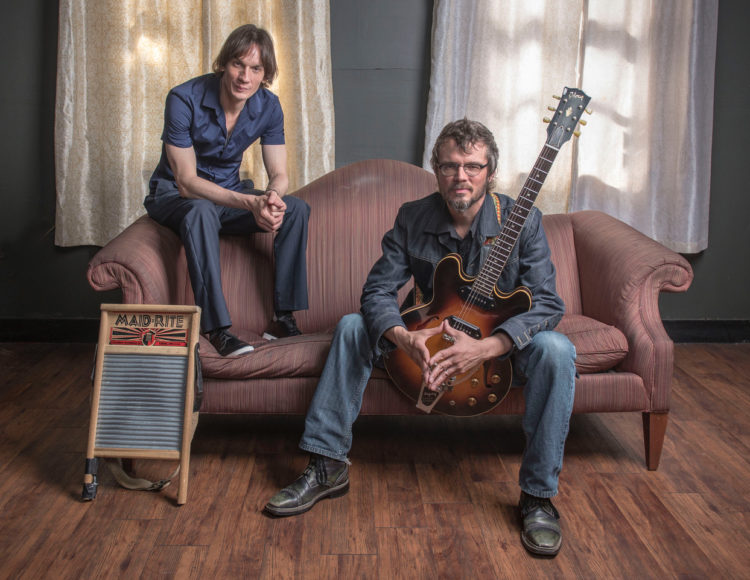 North Mississippi Allstars are back with PRAYER FOR PEACE and couldn’t we all use one of those right about now? Founded in 1996 by brothers Luther (guitar and vocals) and Cody Dickinson (drums, piano, synth bass, programming and vocals), the now venerable band are entering their third decade with perhaps the most vital album of their career. Recorded in studios across America during North Mississippi Allstars’ 2016 tour, PRAYER FOR PEACE sees the Dickinsons weaving their bred-to-the-bone musical sensibility with unstoppable energy, rhythmic reinvention, and a potent message of positivity, family, and hope. As ever, songs like R.L. Burnside’s “Long Haired Doney” and the impassioned title track pay homage to the country blues legacy while simultaneously pushing it into contemporary relevance with fatback funk, electronic innovation, slippery soul, and pure unadulterated rock ‘n’ roll.

“This is a very exciting time for North Mississippi Allstars,” Cody says. “There’s been this explosion of creativity lately and it’s encouraging that for a band who has been around for twenty years now, our music is as vital and fresh as ever. It’s like the opposite of burnout — I can’t explain why but it feels totally brand new again.”

“The blues is not children’s music,” Luther says. “We get better at it, the older we get. We’re so fortunate to be able to do it.”

PRAYER FOR PEACE continues the burst of inspiration begun with 2013’s Earth-shaking WORLD BOOGIE IS COMING. That album, the band’s seventh studio recording, proved the planetary sensation its title promised, with The Guardian simply declaring it the North Mississippi Allstars’ “best yet.”

“With WORLD BOOGIE we decided to tear the house down and rebuild it,” Cody says. “In the process we were able to tap into what makes North Mississippi Allstars tick. What we do is, we look to the past with reverence and respect but we fearlessly forge ahead into the future. We’re deeply steeped in American roots music but we are very much a modern band. We are at our best when we’re exploring both at the same time.”

Though they had been making music together all their lives, WORLD BOOGIE IS COMING saw the Dickinsons advance as a true artistic partnership, striking a wholly democratic balance between Luther’s raw, organic aesthetic and Cody’s passion for electronics and programming. The album was followed by a remarkable run of extracurricular efforts, including solo projects, collaborations, soundtrack contributions, and documentary film production.

“We used to filter every experiment, every new interest, every aesthetic idea, into the Allstars,” Luther says, “because we were so focused on the one band. Now that we’ve spread our wings and have other outlets, everything can just breathe and be itself. We know what we’re supposed to do so we can just go in and do it.”

“It’s like a release,” Cody says. “All this music and all these ideas build up and you’ve got to get them out. Being able to record them and document them allows us to move on creatively.”
A notoriously hard touring band from the start, North Mississippi Allstars had long considered ways to maximize their time on the road by recording as much as possible while traveling America and beyond. When time came to follow up WORLD BOOGIE IS COMING, the Dickinsons decided to make the idea a reality.

“Having our studio here in Mississippi has always been a great resource for us,” Cody says. “It’s kept our music grounded, but at the same time, I have always wanted to do what I think of as ‘field recordings,’ of us on tour, on location, wherever we were.”

The Allstars spent much of 2016 lighting up studios in St. Louis, Kansas City, New Orleans, Brooklyn, Austin, and of course, their legendary father Jim Dickinson’s Zebra Ranch in the Allstars’ own Hernando, MS. Sold out shows were followed the next morning with equally intense sessions, the band quickly banging out tracks infused with the same high energy as they bring to the stage.

“Our dad was a big fan of capturing that initial moment of creation and inception,” Cody says. “There’s a real strength in building up the material onstage, having it crowd-tested, and then just going in and laying it down.”

“We do it so fast,” Luther says. “We go in and record four or five tunes in a couple of hours. In and out. It’s not belabored, it’s raw and fresh and live, we’re dripping sweat and in the moment. That’s why it has that electric psychedelic feel. We just go in there and let it all hang out, clean up the mess later. We don’t even listen to playbacks — we just play, play, play and then split.”

The majority of PRAYER FOR PEACE was co-produced at Memphis’ famed Royal Studios alongside the great Boo Mitchell — himself the son of a legend in producer/Hi Records founder Willie Mitchell.

“Boo is such a magical music man,” Luther says, “and that studio is so inspiring and grounding. You would think singing on Al Green’s mic would be intimidating but it’s not! It’s reassuring. Royal is just a wonderful, wonderful studio.”

“We have always identified with other second and third generation artists,” says Cody and to be sure North Mississippi Allstars have long allied with the families of Hill Country icons like R.L. Burnside and Junior Kimbrough. PRAYER FOR PEACE continues the tradition, with contributions from Graeme Lesh (Midnight North, The Terrapin Family Band) and singer/fife player Shardé Thomas, daughter of Mississippi blues giant Otha Turner. A number of other friends also join the congregation, among them legendary bassist Oteil Burbridge (Allman Brothers Band, Dead & Company), vocalist Sharisse Norman, and bassist Dominic Davis (Jack White).

As ever, PRAYER FOR PEACE sees the Allstars putting their indelible stamp on classic blues numbers and folk traditionals, including Mississippi Fred McDowell’s “61 Highway” and “You Got To Move,” the latter featuring smoking hot accompaniment from Hill Country guitar hero Kenny Brown and award-winning singer/bassist Danielle Nicole.
“I think it’s our responsibility to the community that brought us up to protect the repertoire,” Luther says. “To keep the repertoire alive and vibrant. That’s what folk music is about. It’s an oral history of America. My dad and his friends, they learned from Furry Lewis and Gus Cannon and Will Shade and then taught those songs to us. It’s important for us to write songs and experiment and do other things, but playing our community’s music in a modern way is what Cody and I do best. I think it’s what we were meant to do.”

True as always to the blues tradition, North Mississippi Allstars use the basic structures taught to them as the starting point for improvisation and contemporary interpretation, an approach that inextricably links them to a long line of American visionary artists like the Grateful Dead. PRAYER FOR PEACE includes a trio of traditional songs long associated with The Dead including “Stealin,” “Bid You Goodnight” and “Deep Ellum” — the latter featuring a rare lead vocal from Cody.

“”There’s so many common tunes in The Dead’s repertoire that we learned from our dad,” Luther says. “‘Bid You Goodnight’ and ‘Stealin,” we’ve been playing them our whole life. Original music aside, Dad’s band — Mud Boy & The Neutrons — were kind of doing the same thing as The Dead, playing improvisational versions of roots music. They had an electric psychedelic side and they had a jug band side. So my whole life, acoustic guitar or electric guitar, they’re both sides of the same coin.”

Where PRAYER FOR PEACE truly builds upon the repertoire is with a number of Luther-penned originals. “Prayer For Peace” is among North Mississippi Allstars’ most immediate new songs, a beat-crazy appeal for unity that like the band itself, stands as a righteous celebration of multiculturalism, inclusion, and compassion. Topical though it may be, both Dickinsons assert the album’s goal transcends simple politics.

“It’s not a protest record,” Cody says. “Its message is to bring people together. My dad used to say North Mississippi Allstars make a statement just by walking on stage.”

“We’re not a political band,” Luther says. “I’m not good at that type of thing. One thing R.L. Burnside taught us was that you can play the saddest song in the world, but if you do it with a smile on your face, you can make a whole roomful of people dance. That’s what this record is about. Making people dance. Making them want to rub up against each other.”

That seemingly modest but oh-so-necessary objective will keep the Dickinsons on the road they love for the foreseeable future, ideally recording another LP while continuing to shake audiences young and old with genuine, unadulterated blues power. PRAYER FOR PEACE affirms North Mississippi Allstars’ own unique place in the American musical tradition, simultaneously master curators, expert revivalists, and forward-thinking pioneers. Long may they run.

“Now it’s time to hit the road,” Luther Dickinson says. “Get to work and spread the word. We recorded this one in the spirit of our twentieth anniversary. Now we’re looking towards our twenty-fifth. Twenty years is alright but twenty five is monumental.”

“This is a new beginning for North Mississippi Allstars,” says Cody Dickinson. “This revitalizing cascade of creativity and explosion of music, it’s just been incredible. And I feel like we’re just getting started. There’s a long beautiful road ahead of us. We’re only just now hitting our stride.”